By now I’m sure you’ve seen the news articles and clips about Ahmed Mohamed, the 14-yr-old engineering whiz whose homemade clock was mistaken for a bomb, causing his arrest when he brought it to school to show off to his teachers. If you haven’t, a good overview of the story and subsequent fallout is available from the Dallas Morning News.

It’s another chance to talk with students about profiling and misperceptions–how would this have been treated differently if Mohamed had a different religious background? Or gone to a school elsewhere in the nation, or in the world?

Mohamed’s thank you tweet to supporters is bittersweet–appreciative of the outreach he’s gotten (even President Obama invited him to the White House and encourage him to keep pursuing science) but cognizant of the challenges faced by Muslims in the world today: 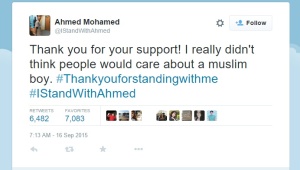 Hopefully the online support he’s recieved will translate into real-world encouragement and appreciation, especially since STEM is all the rage these days in the education world. I have a hard time know how to respond to Ahmed’s tweet–how to tell him there are many people who do really care about him, who want all young people to stay curious and inventive. I’d love to hear how high-school and middle-school students would respond to Mohamed’s tweet. How do they think they might respond if they were in his shoes–with an overwhelming sense of rejection, or a push for resilience?

If educators wanted to connect this to larger world events, one might also talk about the refugee situation in Europe right now. In that case, it’s not just suspected anti-Islamic fears driving many leaders to reject the influx of migrants, but actual statements that reveal some level of bigotry. Slovak Prime Minister Robert Fico is quoted as saying, “This is a ticking bomb that can have very, very bad consequences for Europe. We could wake up one day and have 100,000 people from the Arab world here.” This article from Reuters links the varying reception to migrants to not only their religious background, but whether or not nations have a tradition of immigration and/or cultural diversity. Considering that, is Fico’s response acceptable? Another question for students might be to consider why America’s response to the refugee crisis has been more limited? If this issue were at our doorstep, would we be more welcoming or not?

A final point of evidence that suggests that Americans might not be as welcoming as we’d like to think: on September 10th, 2015, a Sikh-American man was attacked in his car and called a terrorist. Sikh men, like some Muslims, wear a turban and have been the victims of many hate crimes in the United States in the aftermath of September 11th, revealing a very special blend of American ignorance and evil. This is just another example that shows that our nation still has a long way to go in terms of acceptance and religious understanding.

When discussing each of these events with students, I like to frame things not just in terms of “why is this happening?” but also push the conversation towards “how can we respond? Improve? Make things different?” It’s  important not to let teenagers give in to their natural cynicism at all times, but to think about how recognition of these patterns can, and should, lead to action. What can individuals do? What can we ask government to do? Media?

For some more thoughts on how to talk about media and religion with your students, see my other posts here:

Thanks for reading, and, in case you couldn’t tell…#IstandwithAhmed.