This is a great article from The Atlantic about how scientists and historians have begun to use the myths of the indigenous people of the Pacific Northwest to inform their understanding of earthquakes and tsunamis.

In each of the indigenous communities, scientists found incidences of stories retelling a particular earthquake in 1700. 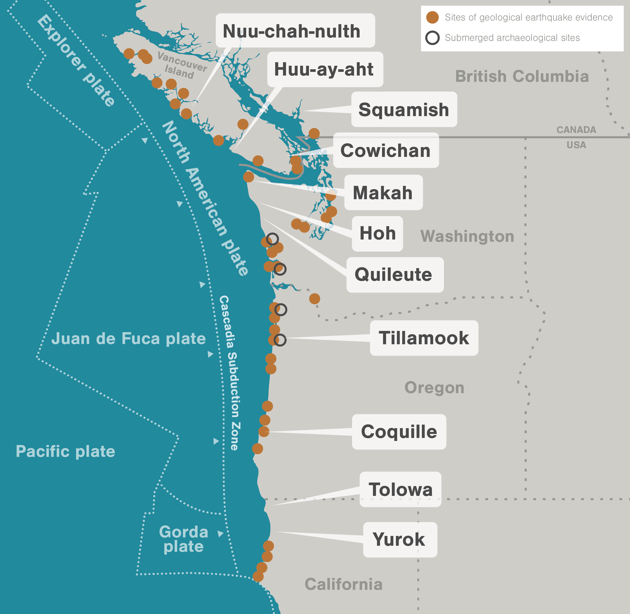 This has helped to solidify the notion that this region is ripe for another such natural disaster. While the myths don’t necessarily give solid advice for survival or preparations, they do offer a sense of the peoples’ resilience, especially when you consider how they have been orally transmitted from generation to generation. For example:

Younker thinks his uncle told him that story partly so that Younker could tell even younger people how to prepare, and partly to say, “make sure you keep your ropes long and your connections to home are well-maintained so you can pull yourself back to home. Because you really can’t separate the past from the present.”

If you teach about indigenous religions, you undoubtedly talk about myths and how they help reveal the ways in which a culture understands the world. What I like about this article is that is shows myths being used in a meaningful way by current researchers (not just as a quaint relic), and also that it offers some reasssurance about cultural and physical survival, in the face of natural or human-induced disasters.

If you are teaching a comprehensive world religions course, you most likely start off the year with a look at indigenous religions around the world. This books is well worth checking out of the library and lugging home (and do use the library! Unless your school will pay for it…) for its beautiful portrayal of a variety of indigenous groups.

It does not focus on religion per se, but by capturing so many different cultures in their native places, it gives insight into the deep link between religion, geography, and traditions that can be difficult to dissect from one another when studying indigenous spiritual beliefs.

Each set of images shows how a group survives, what is important to them, and is complemented by some basic historical and ethnographical details. It would be useful to complement case studies assigned in class, or simply as a beautiful book for students to look through in the minutes before class is starting or as things wind down each day. Some of my favorite images are included in this post, and a link to where I first found the book, on the wonderful blog Brain Pickings, is below.

Whew! My classes have made it through our unit on East Asian Religions, taught half by my student teacher and half by myself. Hopefully they saw past the shifting teaching styles and gained some understanding of Confucanism, Daoism, and Shinto. Here are some ideas I thought worked well:

1) Is Confucianism a Religion or a Philosophy? This was a discussion led by my student teacher that linked back to our conversations earlier in the year about what it means to really be a religion. She used excerpts from a Useless Tree blog post that responded to this article by Peter Berger, as well as another short excerpt from Prothero’s Book, God Is Not One. While I think the readings themselves can be challenging for students, I enjoyed how they got students to re-evaluate the question of what is a religion. While Useless Tree notes that “there is little, if any, concern for cosmological origins or after lives” in Confucianism, I would challenge my students (and Useless Tree) to consider whether spirituality must be confined to questions of our beginnings and endings. Like Prothero, it seems to me there is some sense in a spirituality that aids in the “individual transformation” (his words) that is the mark of our living experience. On the heels of learning about Buddhism, which, depending on the branch, can be similarly removed from deities and the cosmos, and as we prepare for diving into the religions deriving from the Middle East, this conversation was particularly useful as a means for discussing what it means to be a religion and to stretch our original definitions even further.

END_OF_DOCUMENT_TOKEN_TO_BE_REPLACED

Or Columbus Day, depending on where you live in the United States and what your political leanings are, one more post about my Indigenous Religions unit. Have you ever used this article about the Nacirema?

Written by Horace Miner in 1956 and published in the American Anthropologist, it’s an academic look at an unusual and oddball culture–our own. I give a shortened version of it to my students as we start the unit on Indigenous Religions, as if its a group we’re about to study. This year I asked kids to reflect on the group and whether or not they could relate to the Nacirema.

A direct student quote: “The Nacirema were so weird. It surprised me just how weird they were. I could not relate at all.”

And then the big reveal! This article about the super-strange Nacirema? It’s about US! The group name is actually a play on words, and the rituals that Miner describes (bathing, brushing teeth, etc…) are in fact practiced by everyone of my students (well, most days).

It’s a good reminder that when encountering new cultures, their practices can seem quite different and even bizarre. But we should approach things with an open mind. We all have rituals, practices, and strange beliefs. Once students realize that the article is about them, they laugh and try to “decode” it. It’s a nice exercise in close reading, and starts a good conversation about anthropology and the study of other cultures.

I’ve been a whirlwind of activity this week and have not had much time to post. One super-nerdy thing I like to do when I am busy is look up podcasts related to what I’m teaching in class. That way I can walk the dog and learn a little more about my subject material. A podcast that I am fond of these days is Interfaith Radio, particularly their World Religions 101 series. The interview with Stephen Prothero about Yoruba really helped my ability to explain the key concepts of religion to my class. The series is based on his book, God Is Not One, which I’ve also checked out from the library, but have yet to work my way all the way through. If you are a podcast fan, I encourage you to check this series out.

Talking about the Mayan religion today forces a conversation about syncretism. After the Spanish conquistadores arrived in Latin America, the Mayans were quite forcefully exposed to Catholicism. While some converted, others maintained their traditional religious beliefs, and others still managed to build an understanding of Mayan and Catholic beliefs that accomodated both. Exaclty how this works is up for debate–some scholars believe that the Mayans simply took on Catholic names and rituals, cloaking their own beliefs in Spanish terms that would protect them from danger. Others think that Mayan beliefs truly shifted over time with exposure to the monotheism of the Spanish Catholics. It’s extremely difficult to determine which way is which (This paper, by a college student whom I don’t know, does a very nice job of explaining some of the debate, if you’d like further information).

On my travels to Mexico in 2011, I visited a town called San Juan Chamula de Chiapas. This town is a prime example of the facade of Catholicism being maintained simply as a cover for preserving Mayan tradition. In the church, San Juan Bautista (St. John the Baptist), a Catholic priest comes once a year for baptisms. We were told that while he presides over the sacrament of baptism in Spanish, many Mayans continue with their own practices in their local language. It’s easy to imagine this when you are there; the interior of the church looks unlike any other Christian church I have seen. There are no pews, and the floor is covered with long pine needles, the melted wax of colored candles, empty bottles of Pepsi-Cola, and, depending on the day, there may be chickens squawking. Those chickens still squawking are the lucky ones.

While images of Catholic saints line the walls and the air is thick with incense like some cathedrals, the primary ceremonies going on are led not by priests, but by Mayan curanderos, or healers. They commit sacrifices (including the chickens mentioned before) and cure illnesses of the soul. Pox, a type of liquor was traditionally drunk, but now sodas are commonly used in its place. Pictures are strictly forbidden inside the church, and discouraged in Chamula in general. I share a few images from my travels with my students, but mostly talk about my experience. I have them read this article for more details about the town and its inhabitants’ beliefs.

END_OF_DOCUMENT_TOKEN_TO_BE_REPLACED

Rigoberta Menchu, winner of the 1992 Nobel Peace Prize and a woman I deeply admire for her courage, said of the indigenous people she represented, “We are not myths of the past, ruins in the jungle, or zoos. We are people and we want to be respected.” Her statement affirms one of the main goals of my teaching when it comes to indigenous religions: to make it clear that these are living religions, parts of existing and present cultures.

A friend of mine recently posted this clip from the Daily Show interviewing Washington NFL fans about their team name. The fans have trouble identifying the name with little more than a piece of ancient history–one asks, somewhat disbelievingly, “Do you know any Native Americans?”–seemingly oblivious to the many Native Americans that live and work in our country today.

END_OF_DOCUMENT_TOKEN_TO_BE_REPLACED

I tried to make that title into a pun. It didn’t work so well.

This week I’ve been teaching about Mayan religious beliefs as an example of an indigenous religion. I found this wonderful website from the Smithsonian Museum of the American Indian to use.

Three reasons why it is fantastic:

1) It has several 3-5 minute video clips that are perfect for breaking up a lecture.

2) Each video has a PDF transcript–we used the creation story one as a reading in class, but also great for students with IEPs.

3) It has connections to a lot of great visual resources that you can use as well.

I definitely recommend checking it out!